For me, celebrating a birthday on the road is always exciting.  It gives you the opportunity to celebrate with old friends and new as well as doing something different.  In 2006 I went out to dive the Rainbow Warrior in New Zealand followed by celebrations at my hostel.  Then in 2010 I was lucky enough to celebrate by bungee jumping off the bridge in Victoria Falls (some would definitely say it was lucky given reports in subsequent years of what happened to one unfortunate jumper who thankfully survived), followed by dinner at a restaurant serving all sorts of different game meat.  Definitely not something I would have done in London!

Jumping off the Victoria Falls Bridge

For my 30th we spent the day driving down the Florida Keys in a convertible Mustang, so I have been lucky to have done some memorable things to celebrate.

Me and our wheels on my 30th

January Birthdays in the UK are often met with little enthusiasm.  It’s just after Christmas, its cold, dark (and at the moment very wet) so outdoor parties are a no no.  I personally love having a birthday in January.  For me it’s the best month of the year!  Growing up I had some great swimming, bowling, ice skating, you name it parties so it’s always been a fun day for me and a day I look forward to.  Dean laughs, as for me it is a three day event.  Much like Christmas there is Birthday Eve, actual Birthday and then Birthday Boxing Day.  So this is being posted on Birthday Boxing Day – at the tail end of the celebrations.  The only problem with this Birthday malarkey is the rising age number, but there is not much I can do about that!

Dean feels a little left out, as his Birthday always falls during one of his busiest months of work, so he is often away.  I remind him though that I have tended to come out to see him so it’s not all that bad!!  Arguably his Birthdays are maybe more fun for me than him!

On January 14th 2014 we were in Kathmandu.  It doesn’t take much to work out that this is near Mt Everest.  Even though we had seen the mighty mountain on our drive along the Friendship Highway, we hadn’t flown over it.  The idea of a Mountain Flight had hatched as we drove to the station in London to leave home.  It was an idea that had stuck.  Mum and Dad had said they would treat me as a Birthday pressie so we booked the flight and eagerly awaited it.

We had a bit of a nervous wait as on the morning of the 14th Kathmandu was shrouded in fog…. However at 10.30 we got the nod and we led out onto the tarmac.  From that moment on I was treated like Royalty.  The small 16 seater plane took off with all its passengers having full view into the cockpit – a treat in itself.  Knowing it was my Birthday the cabin attendant spent extra time pointing out mountains to me, and the Captain wished me happy birthday over the speaker system three times!  We took it in turns to go into the cockpit to take pictures.  My turn came just as we approached Everest and made a U-turn.  She was there in full view and was amazing!  After this I tucked into the cake that had been made especially for me.  The Himalayan Mountain range was just incredible.

Mt Everest. This doesn’t do it justice as pictures don’t capture how blue the sky was!

This one is for you Mum – me and el Capitan!

Cake really was the theme of the day as we came back to our room to find yet another one there!  Yum!  The rest of the day was spent catching up with friends and family (including a FaceTime chat with my friend and her new new baby), a bit of exploration and a special dinner with my husband. 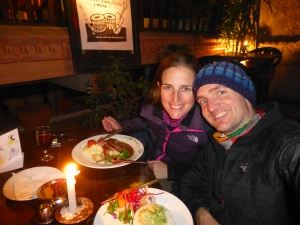 First steak of the trip. I’m hoping the next one will be in Oz as my Mother-in-Law cooks a great steak!

It was an amazing day and one I will never forget.  Dean spoilt me with several pressies during the week all in the name of my Birthday.  A coffee table (don’t ask!), trousers, top, CD, prayer wheel, buff, bag to name but a few!

As for Birthday Boxing Day…. we learnt how to make ‘Momo’.  A kind of dumping made all over this part of the World.  It was an excellent cooking course and something a bit different!

Highlights of our cookery course

Then we headed out to do some more sight-seeing, including seeing the biggest Stupa in the region.  Quite fitting really as it was where all the traders used to stop and pray before making the arduous journey to Lhasa through Tibet.

I really don’t think I can find a way to stretch my Birthday over four days… if anyone has any ideas then let me know!  Thank you to all of you for your messages and comments.

One thought on “Birthdays on the road”