I have got into a bit of a routine when I go and see Dean in Europe.  He works, I go off shopping.  Now for someone who isn’t really a shopper, it makes it all the better when abroad.  I can buy things guilt free as it’s simply written off as a ‘holiday expense’.  Granted nothing is ever that expensive, but it’s still nice to have something different.

This trip had to be different.  I confidently packed my main back pack and it weighed only 13.7kg – 1.7kg over my normal guidelines, but I decided to live with that given the cold weather stuff in there.  I intended it to stay light.  This meant no shopping.

Dean has a set of Russian dolls depicting former Soviet Leaders,  (given one of his previous blog posts you won’t be surprised!) bought whilst he worked up here and I wanted my own set (purple of course) to sit on the shelf alongside them.

Why the Dolls though?  Where do they come from and why do people have them? The Matryoshka dolls, or nesting dolls,  were first created in 1890, and were based on the design of wooden dolls from Japan. In 1900 they were awarded the Bronze Medal at the World Exhibition in Paris.  Shortly after this, production of the dolls appeared all across Russia and became a popular gift for any occasion. Now days they come in all shapes and sizes, anything from three dolls to twenty dolls fitting neatly one inside the the other. Soviet politicians, American Presidents, football teams, TV shows and of course the traditional scarfed girls can all be found adorning these dolls around Moscow and St Petersburg today.

We had kept our eyes open as we walked round, but nothing cheap enough, small enough and purple enough had stood out (guess the most important criteria there?!).  Well that was until we took a trip out to the ‘All Russia Expedition Centre’ –  a 2km long and 1 km wide former Communist playground, with masses of buildings and fountains (of course turned off) and wide pedestrian avenues, rich with buildings from yesteryear.  A fascinating place.  Contained within one of these buildings (next to a massive Lenin statue) were the usual array and tourist tat and there we spotted the newest addition to the Smart family!  From looking at the building outside you would never have guess what it housed.  Our purple and black doll!  Best still they don’t weigh much so all we need to do is guard her all the way home, and then place her on our ‘tourist tat’ table at home along with the miniature Pousse Pousee from Madagascar, miniature hat from Lesotho,  miniature beer stein from the Hofbrauhaus – I wont go on! 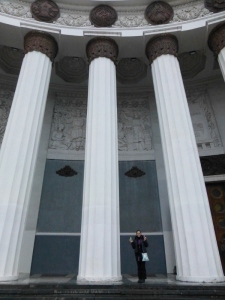 Outside with my purchase(s)!

That’s it… no more shopping again now….. for a while…

P.S Oh and we might have bought my Russian Dolls some friends… Some Russian Christmas Dolls…. Watch out for them in a future blog!

3 thoughts on “Adding to the Traveller Tat – when you think of Russian Souvenirs, what do you think of…?”