Over the years the two of us have done some pretty crazy things. Sky dived, Bungy jumped (some could say Natalie was addicted for a while!), rafted some of the worlds best rivers, mountain biked the worlds most dangerous road, swam with whale sharks, scuba dived, hand glided (we could go on but you get the picture!) but there was still one extreme box to tick for Natalie and an activity for us to do together – Paragliding.

I had done it before in Austria with work but Natalie never had. Researching Pokhara we discovered it was one of the best places in Nepal (and indeed the World) to do it. We mulled it over but it wasn’t until we caught up the Queensland crew for dinner in Kathmandu (we had met them all in Bhaktapur) that the decision was made. So Micky you guys can take all the credit!

We had hardly had time to find a guest house upon our arrival in a Pokhara before we were checking out every company in town. Finally we settled on Sunrise Paragliding, one of the best and longest running. The gear looked good the instructors ok, but critically I was happy with their Go Pro equipment!

The following day, jump day, was probably one of the most amazing weather days we have had all journey. It started with a 5am drive up to Sarangkot to watch the sunrise over the Annapurna mountains, it was also the mountain we would be jumping off later. Not a cloud in the sky, the adrenaline was already starting to flow. 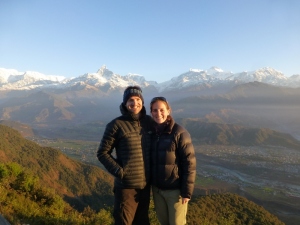 Just after lunch (T-30 minutes to launch) we piled into the back of a pick up with our pilots, two locals and a French guy and drove up to the launch pad. 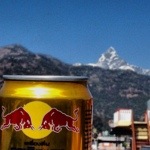 Fast forward to T-5 minutes to launch, we had arrived at the take off point and were assigned our pilots. I was certain the swaggering French pilot would take Natalie (having spent the journey to the launch pad ‘oh-la-la-ing’ her!) however we were both given locals. Natalie had Bimed and I had Man!

As I was being strapped into my harness I turned to see Natalie running towards the edge and all of a sudden she was lifted up into the air and was gone.

Natalie when I Iast looked – then she was gone!

My turn. We now had to wait for a wind gust to fill the chute but nothing was coming. All of a sudden Man said “here it comes look at the trees blowing as the wind heads up the mountain”. Sure enough within seconds our chute rose and we ran towards the edge of the runway.

Before I knew it the ground dropped away and we began circling over the take off point slowly trying to catch the thermals following the path of the hawks soaring in the sky. The scenery was amazing, a cloudless sky and a full view of the Annapurna mountains around us. The sky was filled with reds, greens and oranges of the tens of paragliders airborne today but finally Man and I rose to our highest point, this time following an eagle up the thermals and for a short period of time there was nothing above us just empty sky, wow!

Even time to film on the Go Pro

Paragliding was a totally different feeling for us, unlike skydiving where you are gently descending to the ground, paragliding is all about trying to stay up, catch a thermal, the wind would drop, and so would you, then catch the next one. In fact it almost feels like being on a boat, up and down, up and down. To be totally honest I had a few moments where I thought I was going to be sick!

Coming in over the Lake

There was only one problem with having such an amazing weather day and that was a lack of thermals. As we flew along a ridge Man let out an “oh oh”. What?! Certainly not what you want your pilot to utter 1000 m above the ground! It was ok he informed me,the winds were dropping and he couldn’t catch a thermal to propel us up any higher. With that we started our descent. I’d loved every minute and so wasn’t disappointed – we’d had a good ride. 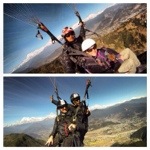 We landed in the drop zone and sat around for a while watching others land, the young boys scurrying around packing up the kits and enjoying the beautiful views over the lake. What a rush, just another perfect day in amazing Nepal.