One of the most beautiful parts of Bavaria is the Romantische Strasse or the Romantic Road. Formed in 1957 to promote tourism the road links some of the best preserved medieval towns in Germany and stretches from Würzburg to Füssen a distance of over 300 km.

The jewel on the crown of the Romantic Road is without a doubt Rothenburg. It is also the most visited but it is easy to see why! Cobble stoned streets wind past bright pastel coloured houses. Vines and creepers wind their way up, through, over and around the brick work and the whole historic center is surrounded by the enormous medieval city walls. 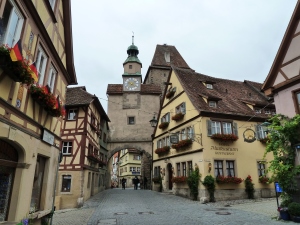 The Roeder Tor, one of the many towers scattered throughout Rothenburg

Walking through the streets of Rothenburg feels like walking through a fairy tale or perhaps a movie set, it almost doesn’t feel real. Little wonder why people love this town. In fact Walt Disney loved it so much Geppetto’s village in Pinocchio is a cartoon recreation of Rothenburg . 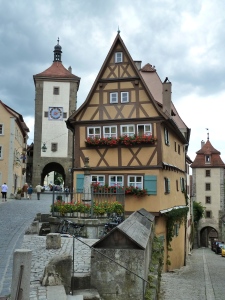 The most photographed scene in the entire city

Day trippers from Nürnberg and Frankfurt pour into the town and come 10:30 in the morning in good medieval fashion you are battling with visitors from around the world for the best photo spots, seats at cafés or Christmas decorations (something Rothenburg is famous for). Beware the coach loads of tourists pouring into the Kathe Wolfhart Christmas Museum, you have been warned! 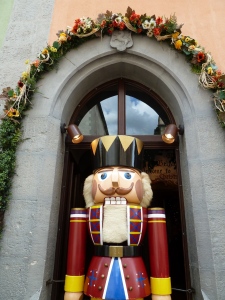 Our best bit of advice? Stay over night, by 16:30 most day trippers have cleared out and you have these dream like streets and alleyways to yourself. 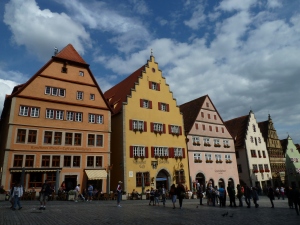 As the sun sets the colours really come alive

Rothenburg is a photographers dream, a great destination for families with lots to amuse children and a romantic little getaway for couples. Put simply Rothenburg has it all and should be a real must on any visit to Germany. 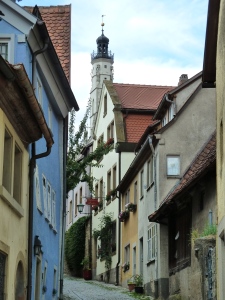 Get lost in the winding medieval laneways

While the city has a colourful history, the most famous episode occurred during the 30 Years War in e 1600’s. General Tilly of the Catholic armies requested that Rothenburg accommodate him and his estimated 20,000 troops over winter. After refusing to do so, the town was besieged and was only taken after one unfortunate local lit a torch inside  the Powder Tower, and…. Kaboom! The walls were breached.

As the story goes Tilly was so impressed by the citizens bravery he promised to spare the town if the Lord Mayor could drink a three and a half litre flagon of wine in one go! The Lord Mayor met the challenge, passed out and saved the town! In reality the women and children of Rothenburg threw themselves at the mercy of Tilly and paid him handsomely to spare them! However the story stuck and every hour from eleven in the morning til eight in the evening this encounter is relived in the small glockenspiel on the Market Square! 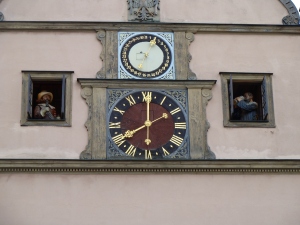 also has some amazing churches a medieval crime and punishment museum and is famous for a pastry called schneebällen. ‘Snow balls’ are ribbons of pastry rolled in a ball and fried in oil then dusted in sugar or coated with icing.

The highlight for many people is the famous Nigtwatchman walking tour. At eight in the evening every night, local resident Georg throws on his black cape, lights his lantern and picks up his halberd for an amusing hour long jaunt through the ups and downs of Rothenburg’s fascinating history. 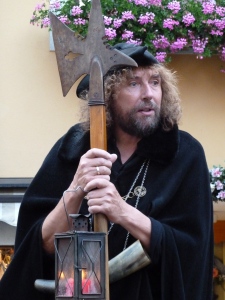 The Night Watchman doing his thing

You could easily while away a couple of days getting lost in the ancient winding streets, walking the huge city walls, shopping for Christmas decorations or purely using the town as a base to further explore the Romantic Road.

Do you have a favourite destination on the Romantic Route in Bavaria? If so let us know and leave a comment below

2 thoughts on “Stepping Back in Time: Rothenburg Ob Der Tauber”