Ever since construction was announced, the London Shard has polarised opinions of Londoners and the public alike. There was rumour that it would threaten the UNESCO heritage listing of surrounding London monuments, and its need and worth were questioned. However, rising up like a beam of light towards the sky, the Shard seized the mantle of the UK and the EU’s tallest building. Like it or loath it Londoners, a new icon of the city was born! 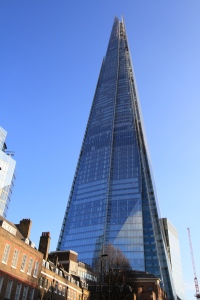 There are 11,000 glass panels covering the UK’s tallest building!

We (well Natalie more than me) love going up things. TV towers, observation decks, roof top terraces, hills and mounds have all been conquered around the world in the search for the best view. Looking down over a city gives you a totally different perspective. Medieval street plans unravel, order arises from chaos and a better sense of the enormity, complexity and the city surrounds is unveiled from a great vantage point.

Two photos looking down on a city. The top photo is overlooking the main market square in Marrakech. The bottom photo is a selfie overlooking Budapest

‘The View‘ was opened in February 2013 and has been high on our ‘Hometown Tourist’ must do list since then.  However other travels and adventures have constantly got in our way, so when a friend gave us two tickets as a gift, it was as if our dreams had been answered. We charged our cameras, picked the day with the best weather and set off to experience London’s highest tourist attraction.

As you would expect, The View follows a similar set up and process as several other observation platforms around the world. Numerous staff are dotted along almost every step (well lift) of the way. As friendly smiles greet you and usher you towards the appropriate queue. Upon entering the ticket hall you a met with various photographs, slide show and time-lapse videos of London sights and sounds (many you cannot actually see from the top of the Shard!). After security there is the compulsory over priced photo, (at around £30 for a photo we are talking seriously overpriced), and before you know it you enter the first lift.

Due to the shape of the shard there are two lifts that you have to take to reach the top. Both have video screens on the roof showcasing scenes from London and the construction of the Shard. After what feels like seconds, the doors open and from the 68th Floor, London unravels before you! 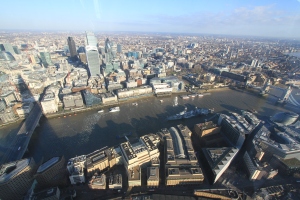 How many iconic London structures can you count in this picture?

With a 360º view, the huge glass panels make you feel like you are suspended above the city. London’s icons look like childrens toys that could easily be picked up and moved around. The famous ‘Gherkin’ building of London’s banking district looks small in comparison to the newer additions to London’s skyline. Tower Bridge and the Tower of London, the Eye, Westminster and even Buckingham Palace are all visible and you begin to realise just how close so many of these world-famous structures are to each other. 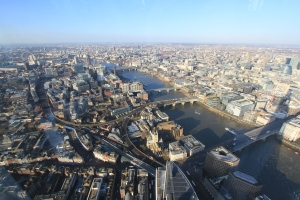 Looking down the Thames with the sun behind you

Natalie summed it up perfectly, when you think of London’s iconic buildings or places you tend to think of them singularly, but when you look down on the city you begin to appreciate them as a collective or as a whole. 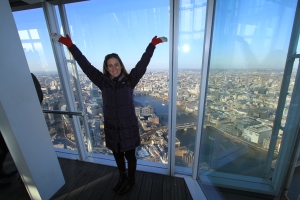 Natalie explaining her theory to me

The View offers you two levels, the enclosed 68th floor and the open 72nd floor. The open floor also gives you a great chance to marvel at the architecture and engineering of the Shard. However, don’t expect there to be a glut of facilities at the top. There is virtually no seating for those who get a little weary, and only a Champagne Bar to quench all but the most expensive thirsts (it is however Europe’s highest Champagne Bar we are told). While we are sure they have them we couldn’t even find public bathrooms up the top!  Natalie was denied the chance to use the loo at the top – something she does from every high building!!

Part of the open air viewing platform on the 72nd floor

Despite these minor issues, a visit is now a must and we would highly recommend it to any of our friends coming to London. The top tip we could give you is book a morning visit. The sun is in the best position for your photos of all the major attractions and it was slightly less crowded. We were also incredibly lucky, a clear crisp winter’s day with hardly a cloud in the sky made for incredible visibility but from some of the photos we saw, an evening visit would also be very cool.

While the Shard still drums up some opposing opinions, love it or loath it Londoners, The View at the Shard towers over all other attractions in the city.

One thought on “Taking sightseeing to new heights: Visiting the London Shard”