The one thing everyone who travels to Cuba mentions is that it feels like stepping back in time. While that is certainly the case with the old cars and the colonial style architecture, the biggest difference to modern life is the lack of Internet and wifi.And that is not a bad thing.

The world has become so connected that you can tour almost anywhere without even leaving the comfort of your own home. Google, Facebook and travel blogs have made the world and information regarding it, so much more accessible. Museums have virtual online tours and the first thing many travellers now ask their accommodation for is the wifi password.

While Cuba has Internet, to get online generally requires lining up in front of the government  run telecommunications company (which can take hours) to use their terminals or slow dial up in some of the hotels.  The expensive Spanish hotel chains normally have wifi (if a little slow) and the town of Baracoa actually has wifi is some public spaces (but it is hard to access, you need an access card and we are told it is incredibly slow). However overall access is very limited, government controlled and not cheap at around six US dollars an hour. Instead of wasting time and frustrating ourselves we embarked on a two week Internet blackout and have to say we quite enjoyed it.

The various forms of social media are one of the lifebloods of any travel blog and going ‘cold turkey’ took a day or two to adjust. However once we broke free of the shackles of constantly needing to be online, travelling around Cuba reminded us of what travel once was in the rest of the world. Hotel receptions, restaurants and bars were filled with something quite often missing in modern times… Conversation. 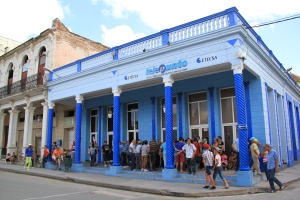 Locals and tourists lining up to get online

Travellers swapping stories about what they had achieved or engaged in conversation with locals about where they were from. A totally different experience to entering a hotel and seeing zombie like travellers illuminated in a ghostly light emanating from their phone or tablet. Couples (including ourselves) sat in restaurants discussing the day’s events or tomorrows plans rather than staring blankly at their phones.

Hotel / hostel bars and common areas used to be a great place to meet other travellers, swap hints, tips and travel war stories but travel has changed significantly over the past decade and we seem to have lost a little of that. This is not us standing on our soap box, we are just as guilty as anyone else (Dean more so than Natalie). It also meant people spent more time exploring or engaging with the locals rather than trying to connect or skyping loved ones back home.

Travelling without Internet access was a liberating experience, especially for bloggers! There was no rush to write or post anything and no deadlines to meet, something we found quite stressful at times last year. Instead we wandered, explored, sat in parks and watched the world go by. There was no pressure to post our favourite photos or share our latest insight into the country. It is as if Cuba still offers an age of innocence to travellers, an age when travel was about travel and not how many likes you could get on Facebook.

If you have never done so, try it next time you go away.  Disconnect, forget (if you can) that Facebook, Twitter, email and the internet exist and you quickly realise just how much we rely on being accessible. Cuba is going to change a great deal over the next few years as America looks to forge closer ties and without doubt one of the biggest and most rapid changes will be internet access. While that is a fantastic thing for the people of Cuba, for travellers we believe it will be a sad day. It will be just one of the quirky and charming differences of Cuba destined to be resigned to the pages of history…

2 thoughts on “Cuba: The Land the Internet Forgot”