Walk into just about any restaurant, pub, or beer hall in Germanic Europe and there is sure to be one staple on the menu, the schnitzel. In fact the schnitzel and its various incarnations can be found all around the world. Veal, pork, chicken, turkey even fish and vegetables can all be given the schnitzel treatment.

In Australia it takes the form of the mighty chicken parmigana, a breaded chicken fillet, covered in Parma ham, tomato sauce and melted cheese. In the USA there is a hotdog chain called Wiener Schnitzel, but for the real deal or as I like to call it,  “Das Schnitzel Kaiser” or ‘The Schnitzel Emperor’ we have to head to the source where it all began – the Austrian capital of Vienna.

Now before we dive in and devour our schnitzel it is worth mentioning there is some controversy over the schnitzel’s origin. Most agree that the schnitzel recipe was bought to Vienna by Austrian General Joseph Graf Radetzky, a man more famous for the musical piece composed bearing his name by Johan Strauss Senior than any military victory he ever achieved. While down in Milan he discovered the Cotolleta alla Milanese and upon his return to Vienna the Emperor Franz Joseph, asked for the recipe.

Another story believes it originates from the Byzantine Empire, where in the 800’s Emperor Basilieios insisted on eating meat covered in sheets of gold! As you can imagine this practice was frightfully expensive so the sheets of gold were replaced with the golden coating of breadcrumbs. Regardless of the origins, Vienna is where one must head for the perfect Wiener schnitzel.

This way to schnitzel heaven

Just like the Emperors of old, there is one Vienna institution that towers above all others in the culinary world of the schnitzel, a restaurant called the Figlmüller. In this small little restaurant nestled in the back alleys of St Stephens Cathedral, Figlmüller has been dishing out world-renowned schnitzels since 1905. So popular has it become that literally just around the corner a second restaurant was opened in the early 2000’s and every night people hungrily wait in line to try this enormous piece of history. 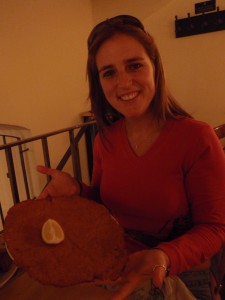 Natalie with her monster Schnitzel

Painstaking attention to detail and schnitzel pride come to the fore to feed the starving masses a schnitzel that is the size of a pizza. Every cut of meat in hammered out by hand with a mallet until it is wafer thin and roughly 30cm in diameter. It is then shallow fried in three different pans until a golden colour. So particular are the chefs at Figlmüller only one type of bread roll is used to supply the breadcrumbs. It is served, hanging off the plate with a slice of lemon and that’s it! If you have room the traditional accompaniment is either a small green salad or a side dish of delicious Germanic potato salad, but again only if you have room.

A German friend once told me there are two ways to tell if you have the perfect schnitzel. Firstly, when you cut into the schnitzel there should be a small air pocket between the breadcrumbs and the meat, and secondly believe it or not, is to place a napkin on your schnitzel and then sit on it! That’s right, if you sit on your schnitzel and no oil soaks through the napkin you have the perfect meal. If you do decide to test this theory out on your next visit to Vienna, don’t blame us if you are asked to leave!

People lining up on a rainy night in Vienna

Whether you get oil on your trousers or not, Figlmüller regularly wins awards for it’s schnitzels, and the huge lines every night come rain or shine to try Austria’s National dish can’t be wrong. Figlmüller truly is ‘Das Schnitzel Kaiser’.