It is with heavy hearts and great sadness we have watched the tragedy of the Nepal earthquake unfold. All too often natural disasters strike countries that lack the infrastructure, equipment and resources to deal with them.

The earthquake has killed thousands and destroyed the majority of historic UNESCO listed buildings not to mention the numerous people unaccounted for at the foot of Everest. Over the next few weeks news crews from around the world will be flying into Nepal, there will be blanket news coverage, but then what? All too quickly the world will forget about Nepal as the next disaster strikes, or the latest cash crisis hits the EU.

Much of Patan Durbar Square now lays in ruins…

Over the years Natalie and I have witnessed first hand the devastating flow on effect these disaster can have on local communities. I had been in Bali six weeks before the bombings in 2002 and when I returned two years later I found the streets deserted, people who had so heavily relied upon tourism struggling to make ends meet. Natalie was in Koh Pi Pi shortly after the tsunami of 2005, and last year we spent time on the Filipino Island of Malapascua only months after Typhoon Haiyan had ripped through the community (in fact our dive centre had only regained electricity the week before we arrived). For those who follow our blog you will also be aware of our push for people to return to Egypt now the country has settled down.

Ask anyone who has visited Nepal and they will tell you what an amazing place it is. The stunning Himalayan Mountain range towering over the bustling and vibrant Kathmandu Valley. Filled with amazing architecture and incredibly friendly and fascinating people. So what, as the travel community, can we do?

Happier times, Natalie and one of the locals in Bhaktapur

Already there have been some amazing initiatives. Intrepid Travel have set up a Nepal Earthquake Appeal through their Intrepid Foundation as have a number of tour operators who specialise in the area. Most importantly, the travel community cannot forget about Nepal. In the months and years to follow, the country and the people will need us more than ever. The country relies heavily upon tourism, and more than any tin rattle, or petition signing, by encouraging visitors to continue to visit is one of the best ways to help Nepal overcome this tragedy. The country will need tourists more than ever and by not cancelling your travel plans or for those of us who have visited, continuing to promote Nepal to our friends, the travel community can have a positive impact in rebuilding Nepal.

Sadly however, in the meantime we can only hope and pray for the families of the missing and the lost… 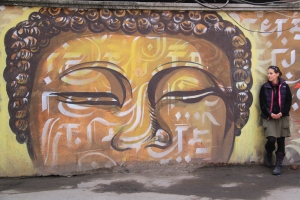 Click here to see the comparison of just how much of Nepal’s historic buildings have been destroyed.

My Mother once said I had lots of qualities of my Grandparents…. And the older I get the more this is true. Gramps (my Grandfather on Dad’s side who is sadly no longer with us) was a keen motorist (and incidentally ballroom dancer). He liked to be behind the wheel though and was not the best passenger! There was a joke in the Cole family that whenever anyone else was driving Gramps’ right foot would be on ‘his’ brake pedal in the well’ol (foot well) making a hole in the carpet. The older I get the more I seem to be trying to perfect this same skill – co-piloting from the passenger seat by braking for the driver!

Ever since Dean returned from Oz he has been on my car insurance although driving me around in my own car can be quite a stressful experience for him. It’s often met with back-seat driver comments and needless to say he enjoys driving my car, when I’m asleep in the passenger seat!

The reason I explain this is because we have been catching a few Nepali taxis to sort out our Myanmar visa and get to some out of town sites. Taxis in Kathmandu are small white ‘Maruti’ cars – some kind of Suzuki. So to say they are a car is probably bigging them up a bit. I’m just hoping we never have to catch one with our luggage as I doubt it will fit! 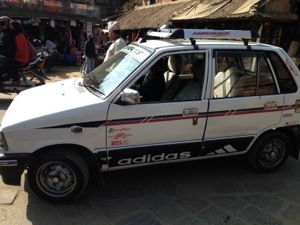 Well the other day we had stayed out at Bodhnath Stupa until sunset then walked a bit so it was well and truly dark before we started the process of getting a taxi. It is one of the few times we have struggled, but our driver saw us, swerved across three lanes and skidded to a halt at our feet. This sight of foreigners make their eyes twinkle in the hope of an inflated fare! We negotiated, agreed and jumped in before us and the Maruti were flattened by the passing traffic.

For the first time I jumped in the front and the ride was better / worse than the most scary roller coaster at DisneyLand! Now every taxi driver in Kathmandu has so far made it their mission to get you from a to b as quick as possible, almost as if your life depended on it. This driver was no different – in fact he probably wins the prize for doing that the best…. In the most unsafe way!

We wheel-spun out of the blocks, turned at right angles and cut across six lanes to make it down the first track we wanted. Once I’d opened my eyes we were doing the mandatory ‘duck ‘n dive’ between pedestrians, push bikes and motorbikes. All this was taking place with no street lights. It was at this point that I began to seriously worry about the health of the driver (and consequently us!). He began driving with his head out the window (no eyes on the road and we were now at an intersection with trucks and all of the above) making such noises that I could only conclude he was in a very bad way. This went on and on. In between his phone rang, he tried to answer to no avail so he rang them back (partial halt to the head out window at this point). Now I’m not sure if it was his wife reminding him in his condition to keep warm, or just his mistress arranging a date, but something made him decide his bobble hat was essential and it had to be clean. Next thing I know (we’ve still revving the guts out the car in 3rd gear and flying along) the glove box comes crashing down onto my knees. I managed to dodge his hand on my knee (I’m sure it was an accident as he was doing too many things at once for anything else) whilst he forridged around for his hat. He found it. Phew – slam of glove box. Somehow in the pitch black he knew it was dirty, so he began banging it on the outside of the car through the window to get the dust out. When satisfied it was clean enough, both hands came off the wheel in order to put said hat on. I meanwhile was applying my brake peddle more times the David Coulthard in his entire racing career only to result in a hole in the floor…. Oh no sorry that was already there and tends to be ‘standard issue rust bother’ on the taxis. Every taxi we have been in has had at least one hole in the car somewhere! Finally I knew where we were and with a couple of sharp intakes of breath we made it.

So from now on we have concluded that I barter, agree the price and climb in the back. Here I delve into my pockets and get out the correct money whilst we are flying through the streets. Dean meanwhile sits in the front and films on his Go Pro. I can still see the chaos… But after we have had a narrow escape and not before! Taxi journeys are part of the fun of travel, but show one of the many differences to life at home. I forgot to say that if you find one of the two necessary seatbelt straps you are doing well. You have more chance of spotting one of Chitwan National Park’s 125 wild tigers than finding both the necessary parts working!

The best place for me – in the back!

I took this little day-time video to set the scene….two seconds and you’ll get the gist! It was taken driving the following day. The driver in this video was cool, fair and speedy. We loved how he worked the wheel!

With the cool taxi driver as he took a break from turning the wheel!

May all your journeys be fast, furious and importantly safe!