It is now less than two weeks until Oktoberfest begins and if you followed are Pre Oktoberfest Checklist you should hopefully just about be ready to go! While a week-long beer drinking binge sounds good on paper, after a few days of being jammed into the Oktoberfest tents you may be looking to get out-of-town and rest your liver. Below we have listed a number of great day trips all within a couple of hours journey from Munich.

‘Mad’ King Ludwig’s castles are the jewels in the crown of Bavarian tourism. Neuschwanstein is the most famous, with an estimated 1.4 million visitors every year. Neuschwanstein was also the inspiration for Walt Disney’s Cinderella castle and has captured the imagination of tourists since the King’s mysterious death in 1886.

The view of Neuschwanstein Castle from Mary’s Bridge

However, while most people flock to Neuschwanstein, his other two castles are equally as impressive. Linderhof, near the famous Bavarian religious town of Oberammergau (also worth a look if you have time) is the only castle Ludwig ever completed. Much smaller than the other two, it is a far easier visit than Neuschwanstein and also doesn’t get the crowds. Nestled amongst the mountains and surrounded by lovely gardens, Linderhof would have to be our favourite of the three.

The smallest and only palace to be completed, Linderhof

The final castle is situated on an island in Bavaria’s largest lake, the Chiemsee and is situated almost half way between Munich and Salzburg. Herrenchiemsee was built to be a living breathing museum dedicated to Ludwig’s idol, Louis XIV of France. An almost exact replica of the central sections of Versailles, Herrenchiemsee is probably the least visited of the three but has an idyllic location and can only be reached by a boat ride out to the island.

Numerous companies offer day trips from Munich and often combine Neuschwanstein, Linderhof and Oberammergau. If you do go with theses agencies double-check what you are booking, as a lot of the tours DONT include entrances into the castles themselves. 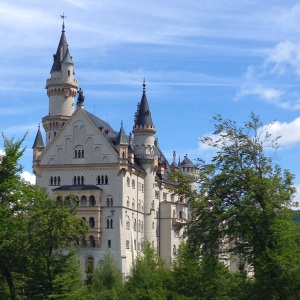 Visiting a concentration camp is not something you will necessarily say you enjoyed, but it is something you will be glad you have experienced. Dachau was the first camp set up in the 1930’s and now days is part memorial and part museum, dedicated to all those who suffered under Hitler’s regime. Getting out there can be a little tricky on public transport, however a number of local tour companies offer trips out to Dachau normally meeting in Marienplatz. We highly recommend the audio guide.

Shadow of the entrance gate into Dachau

3. Berchtesgaden and the Eagle’s Nest

According to legend when God was creating the earth he gave all the natural beauty to the angels to distribute evenly around the world. As you can imagine this is a time consuming job. With the angels running behind schedule (he did only give them a week after all), God bellowed out “Hurry up!”, and the angels dropped all the natural wonders in Berchtesgaden.Or so the story goes. 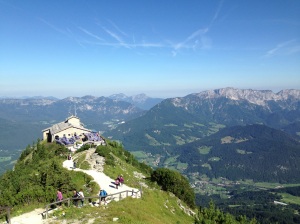 Looking down over Berchtesgaden and the Eagle’s Nest

Approximately two hours from Munich the region of Berchtesgaden is stunningly beautiful. Dramatic mountains, crystal clear lakes and rivers and of course Hitler’s Eagle’s Nest. Specially designed local buses drive you up one of Europe’s most amazing, and somewhat hair-raising roads to the base of the Eagle’s Nest. From here it is a short walk through a tunnel to the original elevator made of polished brass before arriving in the building itself. Eagle’s Nest has a little something for everyone, incredible alpine scenery and photo opportunities for the nature lovers and some very interesting history for the history nerds (like me). Our tip, try to get there early, queues for the buses and the elevator can be very long if the weather is good.

The hills are alive! That’s right, after only a two hour train journey you could be yodeling away Julie Andrews style in the birthplace of Wolfgang Amadeus Mozart . Salzburg makes for a great day trip from Munich if for no other reason to just ‘pop’ over the border into Austria.

Combine the imposing Festung or fortress towering over the city and the charming medieval streets and alley ways, Salzburg is a photographer’s dream. There are plenty of sights from ‘The Sound of Music’ to keep you amused or for something totally different head out to Hangar 7, the home of Red Bull. For great views of the old town and fortress head to the Cafe Sacher and enjoy a slice of the famous chocolate cake, Sacher Torte. 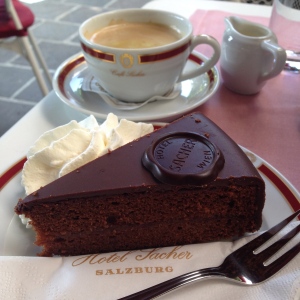 There are numerous other possibilities that we haven’t mentioned her as well. Nuremberg has a great old town and huge city walls, while from Garmisch-Partenkirchen you can catch a cable car up to the top of Germany’s highest mountain. If you fancy staying in Munich there are also some great experiences to keep you busy. We love Mike’s Bike Tours, a great way to see loads of the city and have a seriously fun time doing it. You can also hire bikes from them and they also run trips to Neuschwanstein and Salzburg.

Remember (if you haven’t had too much beer), Munich is a great city and so is the surrounding countryside, so make sure you take time out from Oktoberfest and get out there and explore!