Zoos – they divide opinion and raise a range of emotions. Love them or hate them, they are here to stay, and the one in London is particularly famous. 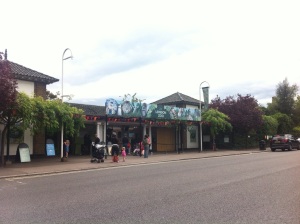 London Zoo opened its doors in 1828 and is famous for many things including being the world’s oldest scientific zoo. The original purpose of the site was for scientific studies to take place and it only actually opened to the public in 1847. Since then it has grown from strength to strength and despite some financial concerns in the 1990s, it opens its doors daily for excited children and adults alike.

The zoo now houses over 750 species of animal, with an individual head count of well over 16,000 creatures. Not bad going considering its central London location. I first went with my parents as a child, and only returned today for the first time in about twenty years.

Now it’s about at this point I should probably be honest. Zoos are not my favourite place in the world. Todays visit was brought on by the opportunity to meet up with a couple of friends, both of whom where going with some lovely little ones in tow. On the rare occasions that I have visited zoos, the experience has not sat too well with me. Often the cramped conditions and pacing animals can be an unhappy sign of the bleak outlook of the residents. I do however appreciate that a lot of good work goes on inside zoos around the world, both in terms of research and breeding programmes. Breeding progammes are in place for well over 130 species at this particular zoo, for which I take my hat off to the dedicated staff there.

For me as I child visiting, a couple of memories stand out in my mind. The elephants, penguins, giant pandas and the statue of Guy the Gorilla! Whilst Guy is still there (in statue format!), several other statues have joined him and things have changed a bit to keep up with the more modern, interactive times we live in. 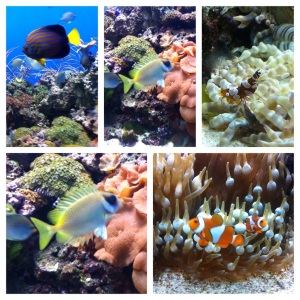 Fish in the aquarium

Elephants had been at London Zoo for over 170 years, when the decision was taken to move them to more spacious surroundings at the sister zoo, Whipsnade. This I can only support. This move was made in part to increase the elephant breeding and conservation programme in the UK, but also as it was widely accepted that the conditions for the elephants at London Zoo were no longer big enough (and in truth, never had been). As for the Giant Pandas, Ming Ming was the zoos last resident. Several attempts were made to breed her with a dashing young male Giant Panda who lived at Berlin Zoo. After these attempts were unsuccessful it was decided she would return to China in 1994, thus leaving the zoo panda-less.

The old penguin enclosure remains (it is a Grand 1 listed building), although these days its inhabitants have moved to a new penguin beachside location, and the black and white creatures swim and sun bathe quite happily. Viewers are treated to watching them swim underwater too thanks to a (sturdy!) Perspex screen. Previously seeing them swim was a sight awarded to me only when diving. At London Zoo it’s an everyday occurrence. 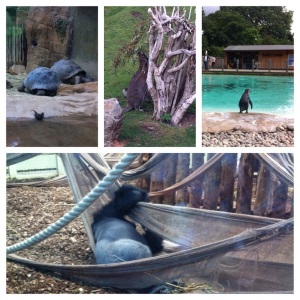 As for the gorillas, well they are still there in the relatively newly built ‘Gorilla Kingdom’ but the sight of them did make me quite sad. I was lucky enough to see these magical beasts in the wild in Rwanda. It is a costly exercise (but worth every penny), and one that I appreciate most people are not fortunate enough to have. When I saw them they were surrounded by space and greenery – grass and trees galore. One of the Silverbacks in the group charged at us and put on a show, whilst the babies played inquisitively. It was one of the single most amazing things I have experienced travel wise. Today’s sight was by comparison, a big contrast.   A giant Silverback hung lazily in a hammock and gasps of excided visitors looked over. Other gorillas were around in the inside enclosure. These amazing animals could have gone outside, but I didn’t blame them for staying in, as by this point it has started to rain. Breeding programmes of captive gorillas have been very successful and huge attempts are being made to improve enclosures for these majestic beasts. For endangered species like these, the conservation efforts are vital. For me it did bring on a chance to reminisce, however it was with mixed emotions that I admired their splendor. 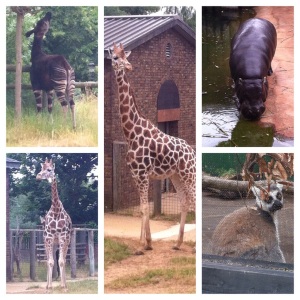 Into Africa… from Lemur to Giraffe

The grounds of the zoo are very pleasant, and a day trip there is fulfilling for everyone. Whether you chose to go into the aquarium or walk through the bird or monkey enclosures, there are hours of entertainment ahead of you. We walked through the ‘Into Africa’ area where I watched with fascination how the pygmy hippopotamus waddled around. After that there was the ‘Tiger Territory’. Having spent days searching for these great creatures in the wild I had finally seen one. I’m sorry London Zoo but I not sure I agree that ‘tiger training’ is the correct name for the activities that take place. It was more like tiger performing, but the waiting crowd did appreciate seeing the large male finding his food. Other enclosures such as ‘The Outback’ or B.U.Gs take no introduction. Every corner of the globe is covered. The zoo is full of listed building and historical facts, including how the under ground tunnels linking the two sides of the park were used as bomb shelters during the World War two. We did almost need a mortgage for lunch, so my tip is to take a packed lunch, although of course you could argue that spending your hard earned cash helps to support the conservation projects taking place.

Above all, a visit to the zoo reaffirms in my mind how incredibly incredibly lucky I have been. I’ve seen gorillas in Rwanda, elephants and giraffes in too many places to list, lions and cheetahs galore, tropical fish in many of the world’s great oceans, lemurs in Madagascar, Penguins in Antarctica and the weird and wonderful creatures in the Galapagos. I have been spoilt, and to see so many wonderful animals behinds bars reminds me that each and every time I go on the trail of finding animals in future, I must appreciate how lucky I am to be seeing them in their natural habitat. I have been truly lucky and for those people who are unable to travel, at least they have somewhere they can go to see a small snippet of what amazing animals share our world. Hopefully with the help of these breeding programmes some of these special species will be here for many years to come.

With a wild Silverback