After our enjoyable few days exploring Jaipur we headed down to Ranthambhore National park, the best National Park in Rajasthan to see Tigers, or so we were told. We had not had much luck in Chitwan in Nepal, and that bad luck followed us to India. The Naturalists, guides and park officials all told us tiger sightings had dropped off significantly over the last week and nobody knew why. We think that someone had tipped off the tigers about our arrival! We gave ourselves the best chance and headed out on four different safari drives but the tigers continued to elude us. It was probably a conspiracy with Indian tourism to ensure we return to search them out again, (our must return to list is getting bigger and bigger!).  Despite the lack of tigers the National Park was beautiful, and we did see loads of deer, monkeys, a few crocodiles and many different species of birds, including the stunning Kingfisher and the Indian National bird, the Peacock. 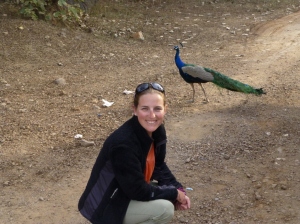 Leaving Ranthambhore, we began what was supposed to be two train days up to the Punjab capital of Amritsar, breaking the journey up by overnighting in Delhi.  After a brief afternoon exploring Delhi, the following day we arrived out to the station to be met with some potentially disastrous news. Our train was delayed, well not just slightly, but 10 hours delayed! In fact it was due to arrive into Delhi at roughly the time it was supposed to arrive in our final destination! If we waited for it, the train may have been delayed further or even cancelled and we only had one full day in Amritsar. This is where ‘Organisation Natalie’ took over. After a quick run-around, and some frantic negotiations, Natalie found a car and driver to take us to Amritsar.

Early on in India we had agreed that we were not going to take night buses if possible, but short on time and facing losing our visit to Amritsar, we decided the car was the only way.  Mid-afternoon we began our eight hour journey north. Occasionally when you travel you find yourself doing exactly what you promised yourself you wouldn’t do, and that’s what happened to us. To say that we had our hearts in our mouths is an understatement. Zipping in and out of traffic, horn blaring we were looking at setting a record pace. That was until we diverted to Chandigarh to swap drivers. Our new driver was worse than the first, if that was possible, in fact we stopped three times to ask for directions to get out of Chandigarh and Natalie read my mind when she said, “do you think he even has his licence?”  I won’t lie, there were a couple of moments with headlights bearing down upon us where I thought ‘This is it’. Yes we could have got out, but we were in the middle of nowhere and it was one of those occasions where you have to go with the better of two options, and that was to stay with our rookie driver.  So close to midnight we pulled into the not so grand Grand Hotel, better late than never and had somehow managed to arrive into Amritsar roughly on time.

Amritsar is home to the Golden Temple complex and was without doubt one of the highlights of India. I had seen the temple on a TV feature during an Australian vs. India cricket series a few years ago, and from that point I have always wanted to go there and see it for myself. The Golden Temple far exceeded my expectations, and put simply it was stunning. Sitting in the middle of a pool of water this shimmering golden structure is surrounded by striking white marble on all sides. It is one of the holiest of sites for the Sikh religion, with people make a pilgrimage to bath in the waters. It was fascinating to watch and another one of India’s photographers delights. 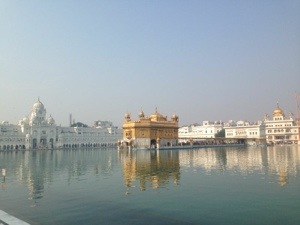 After the morning at the Golden Temple and a little time spent wandering the bazaars we spent the afternoon on a side trip out to one of the region’s main tourist attractions, the Pakistan and Indian border. First stop out towards the border was the most bizarre temple we have visited, dedicated to a local Saint. Comprising room after room of colourful glass mosaic paintings, door entrances shaped like lion’s mouths, and faux grottos we discovered that this temple was visited by local women wanting to fall pregnant! It certainly was something a little different and unlike anything else we had experienced in India.

Then it was on to the border. Every day the border with Pakistan hosts the ‘Retreating Ceremony’, or official closing of the border for the day. We had never experienced a border like it, as it had stadium seating, a DJ warming the crowd up, and music rocking out. Soldiers, all well over six foot, paraded around like peacocks, before doing high kicks and then speedily marching up to the border where they threw their arms in the air, threw down some of their best moves at the Pakistan border guards, (who were doing the exact same thing), all while being cheered on by the crowd who were being whipped into a frenzy by the resident DJ! It had the atmosphere of a cricket match rather than a tense border crossing and it culminated with the lowering of the flag. Before we knew it the ceremony was over and the border guards who had been goose stepping around in an incredibly camp fashion all of a sudden turned into normal border guards forcibly and angrily ushering people towards the exits. Our day concluded with another visit to the Golden Temple to see the sun set and the Temple illuminated at night. Another Incredible day in India.

It was then back to Delhi for a few days to explore the capital. We took it pretty easy in Delhi as Natalie had been hit by a virus which knocked her around quite badly. We still managed to visit all the main sites including the Red Fort, Jama Masjid Mosque, India Gate and several of the old Mughal tombs including the Humayun tomb which was allegedly the inspiration for the Taj Mahal. 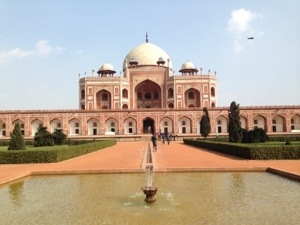 The tombs were a great introduction for our trip down to Agra. We had organised India to finish with the Taj Mahal, and what a way to finish! On our arrival day into Agra we visited many of the city’s other sites such as the Agra Fort, the ‘Baby Taj’ which was incredibly intricate in its carvings and was the first marble building in the city. We finished off watching the sun set on the opposite bank of the river from the Taj itself. We could just tell the following day was going to be something special.

The alarm went off at 6:00am next morning to give us ample time to get to the Taj Mahal for sunrise. To say the Taj Mahal is amazing is an understatement, in fact every superlative and cliché you have ever heard about it is true. It truly is one of, if not the most beautiful building in the world. To see it in the early morning sun light is a moment I will never forget for the rest of my life, it was exactly like I had always dreamt it would be and rightfully earns its place as one of the seven wonders of the world. Our morning was spent walking around the gardens, finding great photo spots and watching the light change on the white marble Taj. Natalie had worked out a great way for getting people to take our photo for us, ask them if she could take a photo for them first. It worked a treat with the obligatory ‘Can we take one for you’ after Natalie handed them back their camera. After a break back at the hotel for a few hours we returned in the afternoon and this time were greeted with totally different weather conditions. The sky was clouding over by created an amazing marbling effect with the clouds and with the sun being blocked gave a whole new lighting effect for our photos. At last count I took some 600 photos so hopefully there is at least one good one in there! Words cannot do this day justice, all I can say is everyone should visit the Taj Mahal once in their life and only then when they have been there can they truly understand why no words will ever do it justice. 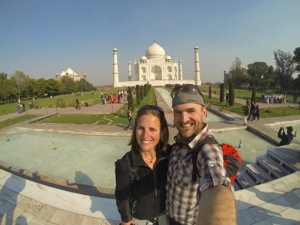 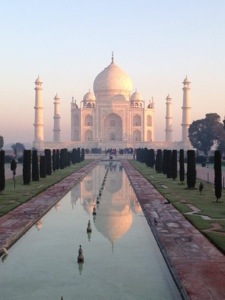 After our incredible Agra experience we bordered our final train journey back to Delhi. There was something bitter sweet about this moment, firstly we had successfully negotiated the Indian rail network, a feat that shouldn’t be underestimated. Secondly, it earmarked the end to our overland adventure, sure we still had some great places to visit, but our first flight in three months was looming, so it was a rather reflective ride back to Delhi. 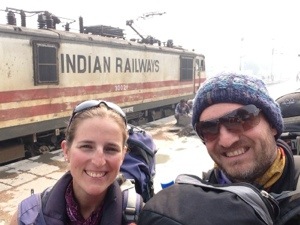 Great trains… too much luggage!

Our final two days in India were spent exploring more of Delhi. First we visited the Akshardham complex. It was a little like Disney meets India, built next to the 2010 Commonwealth Games village it was a showcase of Indian architecture. Sadly however photos were not permitted so we had to settle for the cheesy tourist photo instead (which of course they do allow you to buy!)

On our final day we first visited the Laxmi Narayan temple and then it was down to the Mahatma Gandhi memorial and museum to learn a little about this amazing man’s life. Probably one of the most interesting things I saw there was a quote regarding everyone in India being equal. I wondered what Gandhi would make of modern day India, because 60 years on it felt like very little if anything has changed. 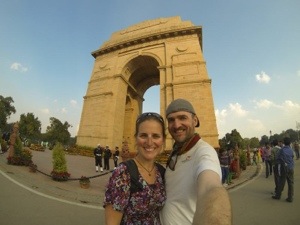 We finished our time in India with something very colonial, we headed out to the Imperial Hotel, one of the most famous in the city, for afternoon tea. Sitting there enjoying our tea and scones we couldn’t help but wonder what people staying here made of India, they were so secluded and isolated from the realities of the country and wondered if they got a real sense of what India is all about. 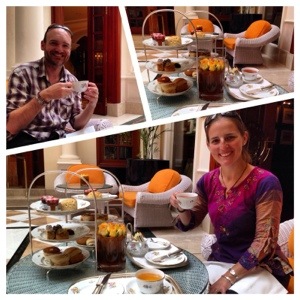 Enjoying the finner things in life!

So after that it was out to the airport and our first flight, while our time in India was relatively short we had experienced some amazing things. You could honestly spend years in India and never see everything. For the independent traveller India is hard work. The trains, the hotels, the touts all start to wear you down, but visiting the Golden Temple, searching for tigers and of course  the unbelievable Taj Mahal more than makes up for the difficulties. As India’s tourism board claims, India is Incredible…..