When I spoke to Dean one day last summer he excitedly told me that one of his guests had been to Myanmar and had told him that a hot air balloon ride over the magical temples of Bagan was a must. That was it – we were doing it! They were not wrong. It is simply amazing and the best way to appreciate the scale of the area.

Fast forward to early February 2014 and we were busy working out dates and plans and Dean came up with an idea. If we could get up to Bagan on the 13th February he could take me hot air ballooning for Valentines Day. Whatever you make of Valentines Day (and we personally think it is all very commercial) this seemed like a great plan to me. Any excuse! I think I got the better end of the Valentines Day plan-all he got from me was a chocolate heart! To make the plan work we took our first two flights of the trip from Delhi to Yangon on the 12th February. We had then reserved seats on a flight to Bagan on the 13th February but had to get there in time to pay otherwise we’d lose our reservation. We made it and took the three short connecting flights to get to Bagan (you wait three months for a flight then five come along at once!). We had an hours lee-way to get from the airport to the ‘Balloons Over Bagan‘ office. They were holding our ‘seats’ but only until 8pm when their office closed. As the taxi screeched to a halt outside their offices, Dean ran in and paid and it was confirmed. Meticulous planning, a bit of trust and numerous phone calls set in stone one of the highlights of our trip, but talk about cutting it fine! Lots of you are thinking why didn’t you pay with credit card and save the stress? Cash still rules supreme here and so it wasn’t possible to use the plastic.

On the 14th February we rose bright and early and were taken down to the launch area for the ‘Balloons Over Bagan‘ balloons. As we got off our bus we were welcomed by Clive, our very cheerful pilot (I was still half asleep at this point after 48 hours of little sleep!) and I knew we were in safe hands. His sense of humour and enthusiasm made our excitement grow for what was coming next – this was going to be amazing! A cup of ‘good coffee’ (high praise from my coffee loving husband!) and heart shaped biscuits awaited us whilst preparations were made. There were five balloons going up from the same field but you would never have known it. We each had our own tea and coffee camp (with Oasis Overland style stools so I was at home!) and all landed in different places so it felt like we were the only ones flying. So well done. It was however really good to see the other balloons in the sky as it made for great photos! 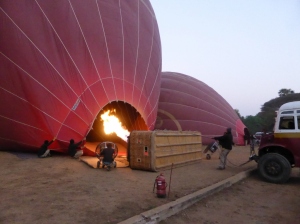 This was Deans first time in a balloon. I had been lucky (probably the key word!) enough to go up in one on two separate occasions in Luxor, Egypt. I loved the flights but as our basket landed on its side on one flight, the landings made me apprehensive. There was never any chance of that today. The guys in Myanmar are in a different league of experience and I was amazed at how well they communicated with each other and their safety standards. 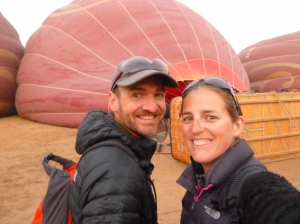 Waiting for the balloon to go up…

After a test balloon had been sent up to “see what conditions were like upstairs” we all got in our basket. The second balloon up, we pulled away and rose at the same time as the sun. From here Clive revealed his ‘office’ from the peace and tranquility of our basket. 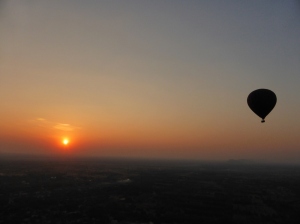 Nothing can prepare you for the scale and magnitude of the temples of Bagan and a flight over them was a perfect start to both our time in Bagan but also Myanmar. We initially climbed before dropping down to get close to the temples. Clive told us a bit about some of the temples and gave us some information on which ones to visit which proved invaluable. We took lots of group photos in the basket and just watched the world fly by. It was way more peaceful ‘flying like a bird’ like this than in our paraglide!

With our flight buddies

After an hour our time was up. Clive was busy communicating with the ground crew (who were also very professional) and avoiding the ox’s in the neighbouring fields! 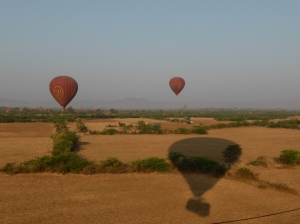 Shadows as we start to come in to land

As we heard his call of ‘landing position’ we put our cameras down and braced ourselves. Well it was such a smooth touch down we barely knew we were down! The ground team had virtually caught the balloon! 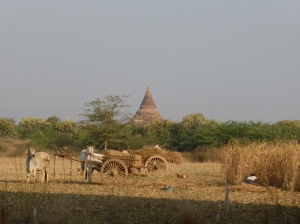 Surrounded by temples and local life… what more could you ask for?!

As we all *cough cough* gracefully (fell) climbed out the basket refreshing towels and crucially a glass of pink champagne were waiting for us. There were also Valentines Day heart shaped cakes and I was really impressed at the effort the company made. On top of this were croissants and fresh fruit. I could have stayed in the field all day! As the team packed away we sipped (three!) glasses of champagne and swapped travel stores with our flying companions. 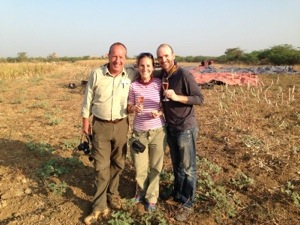 With Clive, champagne and cake! 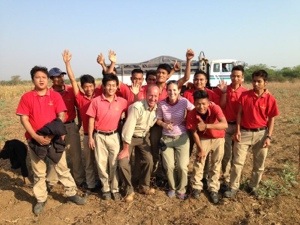 All too soon it was time to go back but even this was a fun ride. Balloons Over Bagan have a fleet of vintage buses and this fun bus drove us back to the door of our budget hotel!! We met a few people who were intrigued by the flight, but their budget didn’t stretch to it. It’s true that hot air ballooning is not the cheapest activity in the World, but as I say to Dean, in life you get what you pay for! Our mornings’ experience was worth every cent and I’d do it again in a heartbeat. In fact Clive runs a Bristol based balloon company called Bailey Balloons which is a stones throw from where I live down south so I’m already plotting a flight back in the UK with him… Nothing however will match up to this one. Everything was perfect and it is and I’m sure will continue to be one of the highlights from our trip.

3 thoughts on “Hot Air Ballooning Over Bagan – up, up and away!”