We continue our Home Town Tourist series with a look at one of London’ s unique historical museums a little out of the city centre.

London is full of museums, and the best thing about them is most of them are free. You can marvel at dinosaurs a the Natural History Museum, discover the Rosetta Stone in the British Museum and even explore London’s oldest prison in the Clink Museum (you do have to pay for this one). However, one of our favourites is the RAF Museum in Hendon.

Originally a RAF airbase in North London, the museum now houses over 130 aircraft tracing the history not only of the Royal Air Force but also of aviation in the UK. 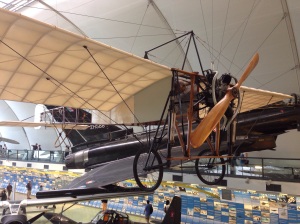 From the early years of flight up to modern day fighter jets, the RAF Museum has it all

Split across four hangers all interconnected the museum contains loads of audio visual information, a chance to sit in several of the aircraft, flight simulators and air traffic control simulators, all designed to bring the various aircraft to life.

One of the greatest military aircraft of all time, the Submarine Spitfire

There are several highlights of the collection including the Battle of Britain Hall showcasing the famous old war birds, the Spitfire and Hurricane that helped defeat Nazi Germany in the Battle of Britain. A Lancaster Bomber and Boeing B-17 Flying Fortress take pride of place in the Bomber Hall as well as the cold war nuclear deterrent the mighty Vulcan (our personal favourite).

A special mention must be made of the Canberra Bomber, which my Grandfather was one of the chief engineers on. There is an amazing sense of pride I feel every time I see her, and was a real buzz visiting with my Dad last year when my parents came over to the UK.

The Canberra, the plane my Grandfather worked on.

It is easy to spend several hours wandering through the hangers marvelling at everything from early RAF Bi-planes, to modern day search and rescue helicopters. There are several free 30 minute guided tours throughout the day to help bring alive the amazing history and is a fantastic museum to visit with family and children. The RAF Museum in Hendon is a must for military history buffs, for pilots and aviation fans and also the perfect big boys toys museum.

For opening times to the RAF Museum Hendon click here