Well Ralph was not wrong! When locals and tourists alike discuss the London West End theatre scene, there is one performance that towers above all. Agatha Christie’s The Mousetrap.

Murder at The Mousetrap

Now this is not because of its incredible sets or the stunning choreography of an Andrew Lloyd Webber masterpiece, but for the plays sheer longevity.

This year The Mousetrap celebrates 62 years of performing in London.  This makes it the longest running play, not only in the West End but the entire World!

So with this in mind and as we continue to discover our amazing home town we decided it was time to pay our respects to this London institution.

Within minutes of the theatre darkening and the cast of characters being introduced, you could feel the tension and mystery build as if a thick cloud had descended over you. As with any Agatha Christie story The Mousetrap cast consists of an assortment of misfits and shady types, all with a hint of murder in their eye. 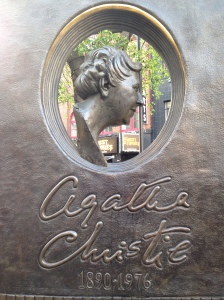 A worthy commemoration in the heart of the London theatre district

The first half builds up to its intriguing peak, and like any good soap opera or drama series you are left hanging as the curtains fall and the theatre ice cream sellers tempt you with their treats for you to ponder over.  As you see the ‘to be continued’ sign, you hear  your mind start whispering different conspiracy theories.

Unlike the good natured musicals that normally appear in the west end, intermission at The Mousetrap is totally different. Groups huddle together discussing in hushed tones who the likely murderer is and the case for and against each of the characters. As if accomplices to the murder itself, there are uneasy looks around the theatre, suspicious stares and the occasional “it has to xxx” wafting over the audience. The intermission almost adds to the rising intensity with the dark cloud of murder hanging over Monk Manor (the setting).  With ice creams finished, everyone quietly and watchfully takes their seat to see whodunit.

The second set is faster paced and even more tense than the first, with you sitting on the edge of your seat until the murder is revealed. Whodunit? Well we can’t say (and if we could, we wouldn’t as we want you to go and find out for yourself!).  At the conclusion of the performance the audience is sworn to secrecy to ensure the mystery of The Mousetrap lives on, but I can tell you it wasn’t the Butler!

Sure there are better shows out there, larger sets, bigger names and famous songs but there is something mesmerising about The Mousetrap. Others have tried, but no one had succeeded.   In Agatha Christies’s case she ‘built the better mousetrap’ and 62 years and over 25,000 performances proves that!

The Mousetrap performs Monday to Saturday at 19:30 in Martins Theatre and afternoon performances on Tuesday (15:00) and Saturday (16:00).  Click here for more details.